I’m asking for a favour here. If somebody has Galaxy Y in his inventory it would be perfect for me to get a snapshot picture of the game I’m working on (link below). It seems that it appears blurry on this device, whatever that means. Thanks!

Have you tried TestDroid? They offer automated testing on a variety of devices, you might be able to grab screenshots that way too.

I’m asking for a favour here. If somebody has Galaxy Y in his inventory it would be perfect for me to get a snapshot picture of the game I’m working on (link below). It seems that it appears blurry on this device, whatever that means. Thanks! 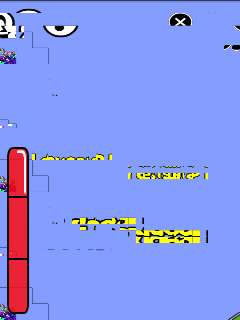 oh boy oh boy, what an unpleasant surprise, many thanks Johannes!

I would appreciate if someone could check the game (version 1.1.1) on Galaxy Y again. I’ve changed the texture alignment in OpenGl, hopefully fixing the problem.

Once again I would like to ask for a favour. The problem is the same, could anyone check the game on Galaxy Y?
The apk file can be found here: www.rixment.com/download/RocketCraze.apk

have you tried in emulator? normally they show most of opengl … “flaws” … i never knew about …

Hmm maybe I’ll give it a go. Still, I would prefer testing it on the device on which I know for sure that the problem exists. This seems to be deeply connected with the device/drivers implementation as the issue doesn’t show up on different devices. Viva la segmentation!
Just as a side note, I also know that sometimes my game hangs up Samsung Galaxy S and here too, the problem is intrinsically related with the device (“CPU pegged” nightmare). Those iOS developers are soo god damn lucky!!!

It is more likely connected with opengl … or better with some of their paramter tweaks of manufacturer implementation.

I had also a problem with some devices, where the range for position vectors was only “short” instead of “int” - i never knew that this is possible at all, but there are 2 or 3 devices out there which have that problem.

I was able to reproduce that in the emulator - I do not know WHY the emulater had the same problem, because it was not a problem of the android version, but maybe the emulator uses the smallest opengl implementation possible … had not investigated it further, because I was unable to do anything against it without rewriting my engine completely

So just start up the emu, if you are lucky, you will be able to debug the problem which will help you the most in finding the problem

No luck with the emulator, the game even cannot start up (I’ve checked the GPU Emulation, Accelerometer and Proximity sensors - all used in the game). I need a device, unfortunately…

Once again I would like to ask for a favour. The problem is the same, could anyone check the game on Galaxy Y?
The apk file can be found here: www.rixment.com/download/RocketCraze.apk

here is a picture, I think it’s the menu, but not sure:

I haven’t seen this bug before, interesting.

ps.: I like the music in the game menu

however that happens, your texture is displaced somehow … do you use any non-default-values for any opengl internal properties? (any reason for it?) Which size does your texture file has? opengl es 1 or 2.0?

in the first screenshot posted here, the texture of the bar lower left is correct, so something is different there

I’ll have to get this devil’s device in my hands somehow! I think it has something to do with the texture data alignment, but it’s just a guess. The game is written in OpenGL 2.0, I wrote the whole engine from the scratch, so now any change like for example using the power of 2 textures now would take me months and I’m not quite sure they are responsible for such a behaviour. On the first screenshot (somewhere above this thread) I see two graphical objects that are drawn correctly, as they are drawn directly on the GL framebuffer. The messed up texture is drawn offscreen and I suspect that it is somehow badly configured on Galaxy Y.
Thanks for the screenshot 5tr4u55, appreciate:)

If a phone does not support openGL ES 2.0 you will be screwed, because in 1.0 texture size has to be power of 2 (as far as I know)
whatever - the info about the offscreen rendering is helpful, because you can clearly see, that the whole offscreen part (i think) gets sliced somehow. You have a part of the screen and then a small black area, again part of screen followed by a black area.

I cannot tell exactly whats wrong but it has something to do with rendering the offscreen surface themself, I would say

maybe you can get a “Y” at ebay for some bucks?

Most of the today’s phones support ogl 2.0. I made my decision at the beginning of my development that I’ll not stick with an old technology (most of the devices that are logged in the Google Play store have 2.0 on board - sth around 90% as far as I remember). Besides I wanted to have an access to shaders programs as I knew they’ll more useful than ordinary fixed t&l pipeline introduced in ogl 1.0.
As for buying Galaxy Y issue, I know that there are some problems on Asus Transformer too (in this scenario the sensor issues) so this approach could be quite painful for my budget - buying every each device on which there’s a some sort of a problem. Damn you Android segmentation!

hehe, yea it is nasty, when some bugs only appear on some single devices

You scared me to death… on Galaxy (S)3 there’s a slow rate?

Yeah, from the specs of the phone [1] I can see that it doesn’t have the gpu build in (as I mention before I do more than a simple scene projection in my shaders). Also the CPU isn’t the greatest and to top it all the game itself is written in 99% in Java so it is what to be expected on those devices

I’ve tried (and still do) optimise the game in many aspects and it started to work quite well on less powerful devices such as Galaxy Mini which I own. Still… I hardly believe that I’ll be able to optimise it even more to have it work smoothly on such a devices like galaxy 3, without an S in front

On the S3 at the other hand it should work perfectly well though. You should know that, those 4 cores should do the trick:D

haven’t tried on the S3 yet, but it will work smoothly, no doubt about it xD

@reiti Can you tell me how bad was the frame rate on Galaxy 3? I will consider removing this device from Google Play store if the game itself was unplayable.