While this is an android forum, my initial app designing was done for blackberry. I’ve since switched to designing for Android as I think there’s much more potential, but I’d like to share my report for the last year with Blackberry apps.

Firstly, to give some background.

I started with Blackberry since all our work phones were upgraded to blackberry devices (I’m a technical manager for an IT support company). During December 2010 RIM dropped the developer signup fee and made it free. This I think was to boost the number of developers before they released the playbook.

I started with an easy item - a theme (no coding involved), then made a small app do display a book on depression (The author is a relative and all revenue for this book goes straight to the author). A few months later a friend joined me in creating apps and we put together a trivia game. This did much better than the other apps and pushed us to work on an RPG. After realising we were getting carried away with ideas for the rpg and expanding it to ridiculous levels, we cut right back and made it a simple roguelike game with limited features (if we didn’t do this I would still be coding the rpg).

We’re working together on everything since and have called our ‘company’ Ambrosia-Designs.

Here are some of the interesting things we learned along the way:

All the apps we posted are paid for apps. I didn’t consider free apps with advertising at the time.

Something to note about payments from RIM - You get a monthly payment for card/paypal/etc. transactions a month later. e.g. Jan’s income gets paid to you end of Feb. There doesn’t appear to be a minimum limit on the payout value.

However there is also the Carrier Billing. This is when someone pays by using their airtime/via mobile provider. This is only paid out 2 months later (e.g. Jan’s income gets paid sometime in march), and only if it’s over $50.

I made a small web app for us to keep track of useful stats. It allows me to import the CSV from RIM and saves it to a database for making my own graphs and stats.

Below are the graphs for January 2012. 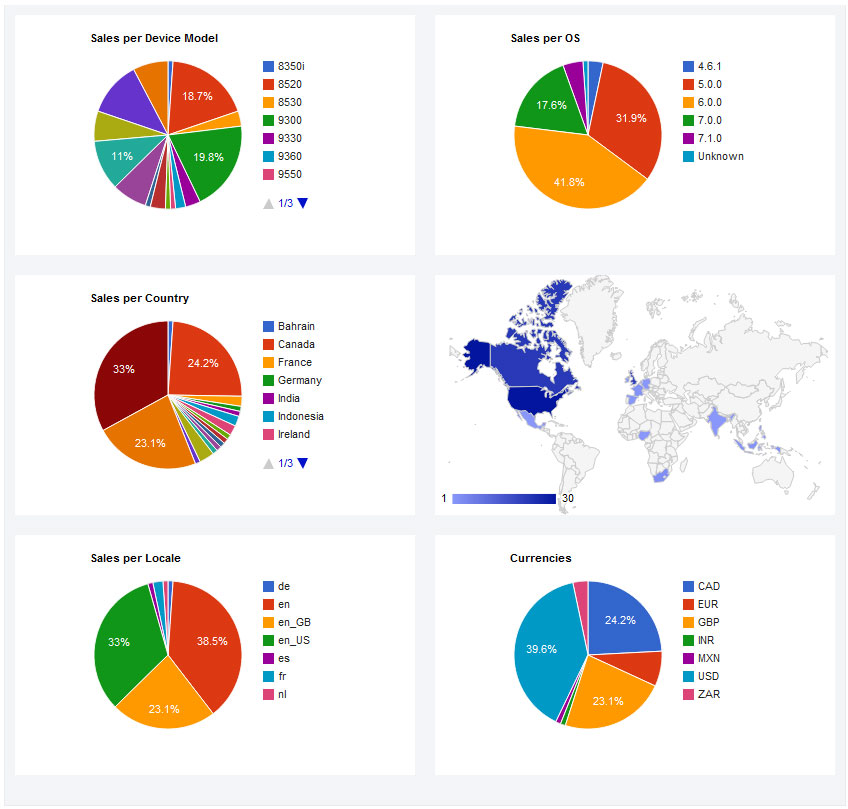 I’ve listed the graphs for January 2012 instead of earlier as it’s more indicative of the current market. E.g. graphs from July have a very different share for OS versions as OS 6 and 7 hadn’t been released yet and many hadn’t upgraded to os5 yet. Whereas now there’s almost none below OS 5.

App World has been bringing in a steady $40-60 per month even though we havn’t updated or added apps for the last 3 or 4 months.

This income is also what allowed us to get a Samsung Galaxy Tab 10.1 for android development. We’ve
also bought a lowish end android tablet in order to test performance on the lower end to ensure it doesn’t only work on high-end devices. We also abuse any friends android devices

Tips for Android Developers looking to develop for Blackberry

Unlike android, RIM is quite strict with their app development and signup process. Don’t be put off by this. For example, I’ve seen many complaints in the developer forums about the registration process since they ask for a document to prove your identity (can’t remember exact name). Depending on your country this can actually be quite easy. In my case I printed out the form I was sent, filled in my details and went to a local Police Station where they checked my Identity Document and stamped and signed the form. I emailed this back and a few days later was approved.

The app approval process is also a daunting at first. Besides uploading images, descriptions, etc. you also get asked questions such as “does your app use any encryption methods”. Generally encryption can be a big issue in some european countries, but this mostly applies to encrypting actual messages - e.g. in an email or messaging app. They are also very strict on the content licenses. You need to specifically state who any images/artwork/sounds/etc belong to or license. I’ve found that simple sentences such as “all artwork created by myself” or “spash screen created by [insert name]. permission given to me for unlimited use in app” works fine. For artwork from internet it’s worth putting things like “creative commons license” and listed the website license page or something similar. If you leave info out you are likely to wait longer for app to be approved as they’ll email you for more info and wont approve till they have everything they need.

Developing for Blackberry devices is harder than android. This you’ll find repeated over most blogs and sites. It’s easy now for the playbook since you can convert android apps. For base BB models you’ll need to convert a lot more, if not redo from scratch. Your general functions will work fine, but all layouts, xml files, canvas drawing functions, etc. would need to be done differently. In the end, even if you develop for the bb phones instead of playbook, it’s not really all that much harder, but will require some perseverance.

If you design for phones, I recommend finding a way to monetize free apps. From the graphs you can see that the majority of paid apps are from your first-world/large countries - US, UK, Canada, with some from the others. Blackberry is HUGE in some countries, for example India, South Africa, etc. However the sales are minimal. My theory is that it’s due to the actual type of users. The countries where Blackberries are most popular are usually those who cannot afford iphones, android devices, and more importantly - data plans. BB has an unlimited data plan for a minimal cost. This is what attracts most users. This also means they don’t want to spend money on apps. I suspect that free apps can do much better than what I’ve done with the paid ones.

I was hoping to be able to compare paid android app sales with blackberry paid app sales eventually, but since Google doesn’t support merchant accounts in South Africa that’s not going to happen unfortunately.

Thank for that detailled post - I enjoyed reading it.

I have my own opinion about Blackberry - they had a good stand from the start of smartphones, but android will fill the casual sector and MS will fill the business sector sooner or later, so I see not much room for blackberry.

Your LCARS Theme I think can work very well on android as a paid app because most of the trekkies are of a “decent” age (like me) - and the olderly ppl are more willing to spend money than kids do.

South Africa is still not supported? So you should clearly go for ad supported apps - or try amazon store or slideme

Wow, thanks for such a detailed an informative post! There are some great tips there, especially for Android developers looking to release apps for the Blackberry Playbook.

I never knew that RIM allowed developers to hide negative ratings. It’s an interesting concept, although it puts the power in the hands of developers, to decide how their app listing should appear. I personally prefer the Android Market / Google Play Store approach, where the comment moderation is crowdsourced, and the most helpful comments tend to appear first.

I certainly agree when that the app submission process is daunting. Even more than Amazon. I’d be interested to know if this is due to legal reasons, or just because RIM decided they wanted to filter the app submissions to keep up a high standard.

Anyway, great to see your results so far, and all the best with your future efforts in Ambrosia Designs! I suspect you’ll be able to get some good results with free/ad-supported apps on Android pretty quickly.